This post is part of a series on the ELF format, if you haven't checked out the other parts of the series here they are:


In this and the next post I'm going to explore how Elf files manage to pull off the magic of symbol resolution as well as the format, offsets and records in the Elf that represent this information. There are many facets to this mechanism in the format, and before I get into each of them I'd like to provide a gentle intro to frame your thinking around why things work the way they do.

Symbolically locating the purpose of relocation


If you are already pretty clued up on why this important  feel free to move onto the next section.

I know you probably want to jump right in and look at all the awesome C definitions and byte offsets but I found that its much easier to understand how all these obscure offsets and hex values work if you know a little bit of the intention behind them and appreciate the real complexity of the problem being solved. So lets talk about why C programs need relocation and symbol tables.

We know that code can become pretty big and to make things more refactor-able and reusable, we spit it up into smaller parts(1). There is a natural need that develops: to able to break code up into smaller sub-classes/files or general organizational units. In C/C++ this terminology is referred to as shared libraries and the Elf file format offers this functionality through Relocation, Symbols and Dynamic Linking. That is to say that the "things" being relocated, are symbol and symbols are for the most part variables and functions of different flavors.

The object of compiling and linking objects

It also helps to picture what the compiler does to achieve a preparation of this information. Knowing what the final goal is helps us suffer through the annoying complex and obscure steps that aid towards it.

When throwing together different shared libraries and object files, the linker decouples the actions of resolving symbols from linking the files together. So essentially there will be a first "sweep"(2) that slaps the different shared libraries and object files into a contiguous sequence.
That action means in the final Elf object file, we are simply adding an offset to the original addresses of symbols that displaces them from where the originally appear in their own files.

An even simpler way of thinking about it would be to say its basically like grabbing a bunch of arrays and sticking them inside another array to build an array of arrays (which is a common action many languages). I've depicted a minimal link and compile process with gcc commands included and even stuck in the real offsets some of the functions got mapped to:


So this is essentially the work flow of the compiler at a very high level, what should focus your investigation further would what those deeper details and hex obscurities are that achieve this aggregated behavior. Why does this picture appear to work so smoothly? Well it must be hiding its hideous details away!

In closing, what you need to imagine here is that for each attribute there must be some bits and bytes that allow quick determination of the settings for each attribute as well as how it managed to end up in its place in the final Elf object file. In the next section we cover how this format works and what allows it to offer this amazing functionality and we are going to show how horrible it can get when this breaks!

So the Elf format needs to find a clever compact way to bundle information so it represents the plethora of things that determine the type and scope/binding of a symbol and what must be done to resolve it as well. The symbol table is meant to show us the symbols we want to relocate.

Before we dig into things, here's a cheat sheet showing you the scope and break down of the Symbol Table:

The following struct is used in libelf, it should expose some important information about how Symbol Table Entries work (extract from glibc/elf/elf.h:529-536):

I've added the type size so you don't need to scratch through the typedefs to figure this out, you're welcome!

So the way I like to think about this is: Because the order and sizes of this field we can quickly notice that the first 8 bytes (st_name, st_info,st_other,st_shndx) acts like kind of a meta-data header, it allows determination of the attributes of the symbol and everything after that points to the actual value that the symbol holds (its address, offset etc - this depends on the values in the first 8 bytes some what).

Okay so what do these fields mean?

Visibility types for symbols include (also available from the diagram above):


Lets take a look at how this information is represented on disk in raw binary:

I've skipped the first record because its always going to be a null symbol (same goes for the .dynsym). For the symbol highlighted here we can see the following:


I took the first non-null symbol entry and expanded on it but there are always more elaborate examples to draw on, make sure to pop open hexdump and reverse engineer some of these structures yourslef ;)

We are not going to cover relocations just yet I thought the post might be a bit lengthy and bloated. For now we are going to treat the symbols as a piece of meta-data on its own and worry about how the dynamic linker might make use of them.

That's pretty much it as far as the symbol table goes lets see if we can pull off some tricks!

"Signs and symbols rule the world, not words nor laws" - Confucius

So we know that there are some programs that rely on symbol information; these are things like objdump and gdb . What we're going to do is replace a symbol for a function with another one, and then see what objdump and gdb makes of this.

So this is me placing the address of the main method in the symbol table with the one for never_call:

Just in case you're curious, yes the binary does still run completely as intended; never_call() is uhm never called, but something interesting happens when we disassemble main in gdb:

Huh? I ask it to disassemble main and it give some code for never_call? I never called for that! (I'm milking this too hard aren't I? hehe). Anyway gdb fell victim to that old symbol magic!

We can also see that if we ask objdump about the main method it doesn't seem to have some code for it (if you run this grep on an unedited never_call.elf it will show the main() method of course, here it only shows the stub code for __libc_start_main, which eventually calls main itself - but is a fundamentally different function. ):

When I was trying out tricks for this one I accidentally replaced start, so just to confirm that objdump does completely trust the symbol table check out what it says about _start. 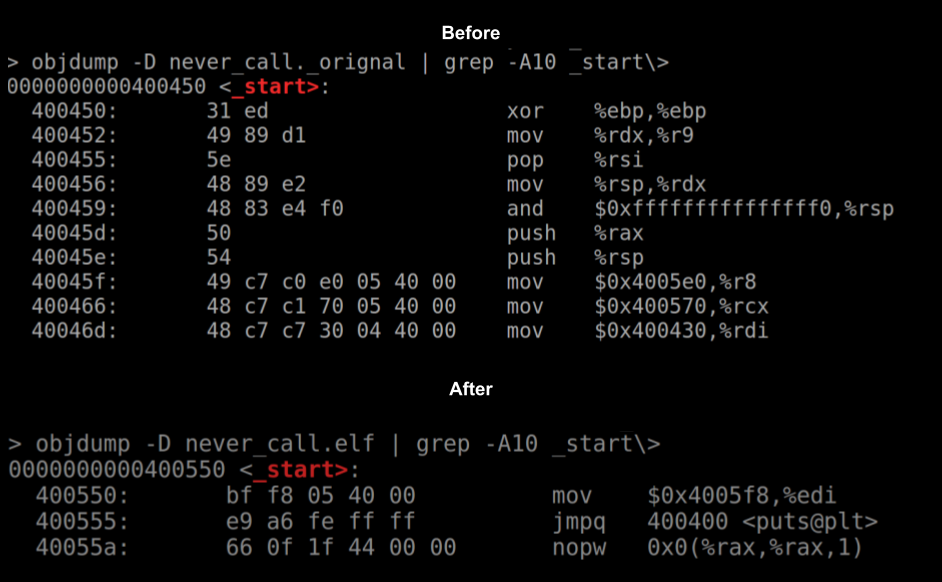 Now you might wonder how main still gets called? If in my mistake and the previous example we are replacing the symbol pointers for main, why does the proper main still get called?

Well if you look at the screenshot above you'll see some of the instruction encoding data in the second output column. Look closely at the one at 0x40046d  (which reads c7 c7 30 04 40 00 ). This shows that the address for main, which is passed to rdi  ( which is 0x400430 ) is baked into the binary, as in it is passed to _start from outside of the potentially broken functionally of the symbol table. So it will happily march on calling the real main instead of the redirected on in the symbol table.

Anyway that's it for this post, stay tuned for the next one! I'll extend our discussion on the Symbols and include a break down of how relocation work.