Posted by Keith Makan September 12, 2018
ELF Files are charged with using their magic to perform two holy tasks in the linux universe. The first being to tell the kernel where to place stuff in memory from the ELF file on disk as well as providing ways to invoke the dynamic loaders functions and maybe even help out with some debugging information. Essentially speaking its telling the kernel where to put it in memory and also the plethora of tools that interpret the file where all the data structures are that hold useful information for making sense of the file. Anyway that's as far as I've figured it out - the actual break down is a little less simple.


I'll demonstrate why this is so here and over the next series of posts in the classic "Learn things by breaking them" style.

The first thing that appears in an ELF file is of course the header, which is like most things in file formats just a list of offsets in the file. Its purpose is to indicate essentially what kind of ELF this is and where the various interpreters of the file can find the good stuff.

Here's what the header looks like (I've included a sample here, you can grab any ELF file on the system):

If you're not super used to the linuxy world, please don't pay strong attention to the .elf extension to  my file normally ELF files do not have extensions to their file names. 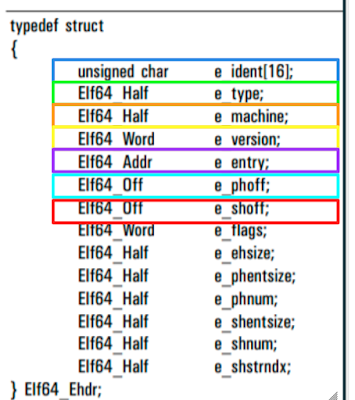 The first field is called the ELF Identification. The ELF format is pretty flexible in that this same format can run on  a ton of different architectures, with support for multiple encoding and Application Binary Interfaces.  Here's the break down on how the EI_IDENT field works :


One can see what the EI_IDENT field says by looking at the output of readelf -h.

Lets see what happens when we change the value of the ELF version number, pop open hexedit and change offset 0x06 in the file to whatever you want, then run readelf -h on it. Here's what happens when I do this:


The next file after the e_ident file is the e_type. In the example above I claim that the type is one of EXEC (since it reads 0x02 0x00) - which according to the ELF standard means its meant to be executed (checking the standard will confirm this).

Lets dump the header of what it is probably a shared object and compare the parameters for the e_type field for instance. Here's the header for libvlc:

This one has the field for e_type set to the bytes 0x03 0x00 at offset 0x10 in the file header - this means its an ELF type of DYN which means its definitely a shared object. And here's read elf confirming this information:

After the type field we find the e_machine specification for the file which can have a number of settings each indicating the architecture this file is meant for. Again ELF supports a number of architectures so there's a range of values this can take. Might be a good idea to fiddle with this field and see what happens.
Here's some examples I found that don't appear in normal documentation:

Always good to throw a couple bytes at the format and see what it really does! Moving on the next field is the e_version which also indicates the ELF version number, which should as the byte field in the EI_IDENT field. You can pretty much set this to anything and it should still run:

The next field is one of the most important so I thought I would pop it in its own section and show you how to fiddle with it in a way that confirms its behavior.

The e_entry field lists the offset in the file where the program should start executing.Normally it points to your _start method (of course if you compiled it with the usual stuff). You can point the e_entry anywhere you like, as an example I'm going to show that you can call a function that would other wise be impossible under normal execution. To start here's the C program and the Make file I'm using:

As you can see the never_call function never does get called in the main method. And when you run it the following happens:

Now lets see if we can make the e_entry point to the never_call method. To do that we need to get the following done:

In my example the never_call is at address 0x400526.
If you've injected the address correctly readelf -h ./compile_me.elf should show the following:

and when you run it you should see...

That's it for this post folks in Part II I'll cover the rest of the ELF header and do some weird stuff with PT_LOAD commands. Stay Tuned!