Hi folks, this post is part of a series in which I try to explore the internals of glibc's implementation ptmalloc2 which is used for managing heap memory. In this post I'm going to specifically pay attention to the main_arena and the malloc_state structure, which is used to store some important pointers for searching heap memory.

The heap bakes the main_arena struct right into process memory. Its a struct of the type malloc_state and holds the following fields (extract from glibc-2.23/malloc/malloc.c):

Here's what some of the interesting fields mean (in addition to the already very helpful docs):

These are pretty self documenting.

So it uses this to extract a "binbit" and this asserts whether the bin is in use or not. Anyway that's enough about the fields lets see them in action.

Exploring the main_arena with gdb

To explore the main_arena I whipped up a simple C program that allocates some chunks in series according to a size I specify on the command line.

I then ran this in gbd and set up an gdbinit to dump the main_arena.  Simple gdbinit file:

I also dump what is usually the start of the heap at 0x603000 when I'm launching in gdb and some thread information. First thing I wanted to know was where each fastbin size goes according to practical demonstration the basic procedure was:


We of course need to know where fastbinsY starts, which gdb and glibc this is pretty easy, all you need to do is run it, set some break point and issue this command:

Pretty much the same as far as the other fields go if you're curious enough. Okay so we know where the fastbinsY starts. Lets see what happens when we increase chunk size by 10 bytes everytime, basically I just ran arena.c like this:

The r 10 5 1 here means, run this with chunks of size 10 bytes, allocate an array of 5 chunks, and allocate and then deallocate them for 1 round.  And after collecting enough data for size of chunks 10,20,30... until the fastbinsY is no longer used I saw this:

So clearly as soon as a chunk is bigger than 120 bytes on my machine it will start becoming an unsorted bin. We can see this when we do a request for 130 byte chunks: 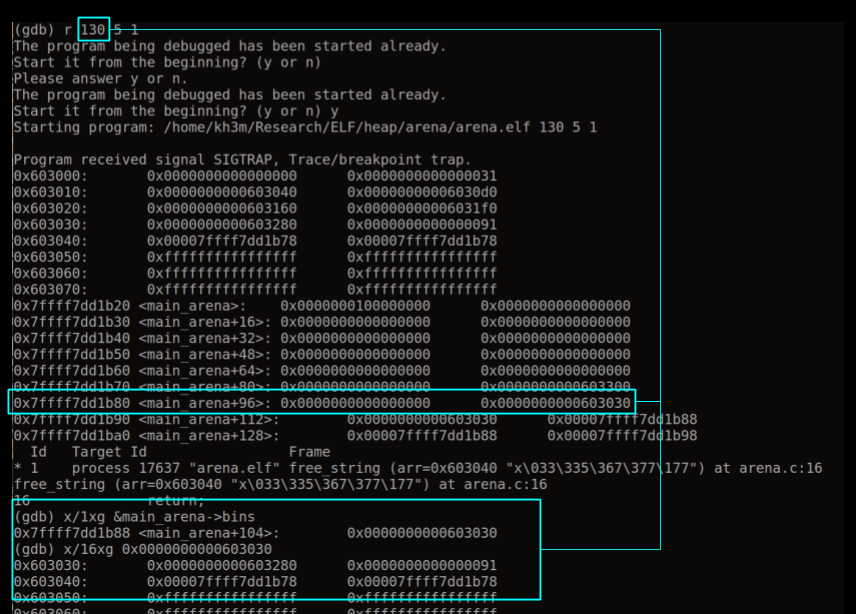 So what happens if you try to change main arena fields while the heap is use or while the program is running? Lets see:

The screenshot above was produced by running the alloc/delloc for 2 rounds what I did was:


After injecting a sample pointer we can see that the 0x434343 value gets pop'd into the main arena at the end of the error dump:

Pretty interesting! This field that gets pop'd out is none other than the mchunk->fd pointer which would obviously point to the next free fast bin.  So we now know that when a chunk is assigned the fd pointer is replaced with the previous one.  Right now I can't really see a useful way to abuse this, it just opens up some behavior that may be useful later.

That's going to be it for this one, next post is going to cover some stuff about the heap life cycle, which method actually get called when the heap sets up and tears down behind the scenes.