Abusing WebVTT and CORS for fun and profit

Posted by Keith Makan September 19, 2016
WebVTT is a way html5 developers can display and cue text as subtitles for video formats. The grammar for WebVTT is pretty simple and as we know browsers are always willing to forgive any "weird" looking grammar in an effort to provide best effort experience for users. This post looks at ways to take advantage of WebVTT in some attack contexts in order to extract information or perform general DOM abuse.

Video tags can make use of subtitle files, as follows:


The file merely describes cues, allows you to number them and associate a duration and display time for them. Display timestamps specify hours (hh), minutes (mm) , seconds (s) and milliseconds (ttt). According to my basically inspection of the grammar, most browser require you to respect the placeholders (significant figures) if you specify the magnitude. For instance, if you want to indicate hours you need to use both place holders, same goes for others. You must specify the "-->" to indicate the end timestamp.

The grammar is not extremely strict, you can get away with alot. Here's a quick summary of some of the things I've noticed for Safari, Chrome and Firefox:

So now that we know what we can and can't do with the grammar lets see how we can abuse this. Here's the attack contet:

This is for all intents and purposes the same attack context as a CSRF vulenrability, and abuses the same mechanism in the browser that a CSRF attack does. Point number 4 is the kicker, should any JavaScript, JSON, or any arbitrary content harbor secrets in such a away that the attacker can inject into the first few bytes, there is a way to extract these secrets using WebVTT.

Here's the basic attack idea, the attacker hosts the injectable page in such a way that it is interpreted as a WebVTT page, here's a demo
The trigger (as seen above) looks like this:

If this is inserted into the first few bytes of the page it will force it to be rendered as follows:


Which then forces the browser to interpret it as a valid WebVTT file, and the HTML content would be the subtitle text. Here's where the magic comes in; most browser have a javascript API for accessing the actual text in the cues, here's a quick demo of extracting the first cue's text:

And here's a screen shot of me using this trick to demonstrate that it could work against HTTP headers (random arbitrary content) should I be able to inject the WEBVTT preamble as discussed above (the screenshot shows Safari and Firefox): 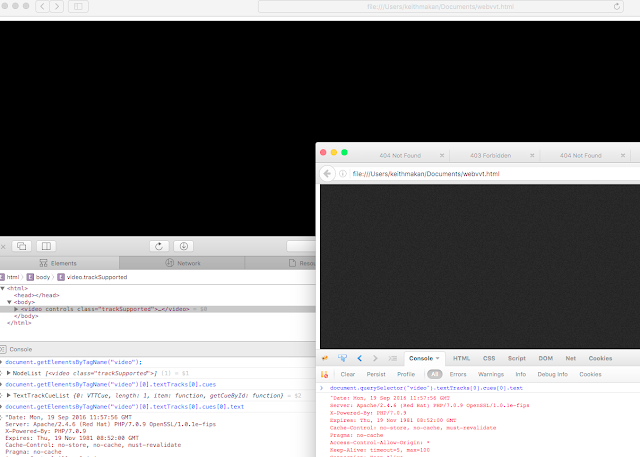